A final goodbye to my grandmother: The Interment 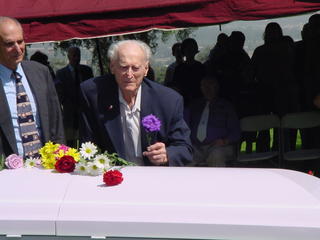 Today we buried my grandmother. Here is a picture of my grandfather placing a purple flower on her casket. As he did he said, "I know you're not here dear, but it seems appropo to lay a purple flower on your coffin." Purple was her favorite color. I also heard a heart warming story from a man who grew up in her neighborhood. He said that my grandparents were the first ones in the neighborhood to get a color television, everyone else had black and white. So every year my grandmother would invite in all the children in the neighborhood to watch the Wizard of Oz. She would even make popcorn and have goodies for them. All these years later, it was still a vivid memory for him.

I was asked to speak briefly at her interment. I shared the following scripture.

"All these died in faith, without receiving the promises, but having seen them and having welcomed them from a distance, and having confessed that they were strangers and exiles on the earth. For those who say such things make it clear that they are seeking a country of their own. And indeed if they had been thinking of that country from which they went out, they would have had opportunity to return. But as it is, they desire a better country, that is, a heavenly one. Therefore God is not ashamed to be called their God; for He has prepared a city for them." (Hebrews 11:13-16)

This world is not our home. We are just sojourners on this earth. God has prepared for us a new home with Him. A home where there is no sickness, disease, sorrow, pain, death, or goodbyes. It is a place that needs not the light of the sun or moon because the Lamb in the center is its light. My grandmother is now home and, one day, all of us who loved here will join her in the presence of our Lord.

David Robison
Posted by David R Robison at 1:01 AM

Email ThisBlogThis!Share to TwitterShare to FacebookShare to Pinterest
Labels: My Grandmother