A final goodbye to my grandmother: The Funeral 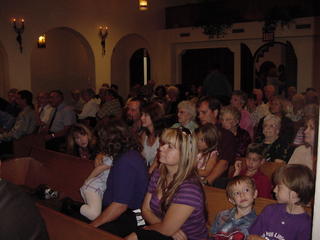 Today was my grandmother's funeral. It was good to see so many friends and family come together to celebrate her life and to rejoice in her reward. Much of the family I had not seen for quite some time. Many who came shared how grandma (and grandpa) had touched their life. As they shared their stories, two things struck me. First, she was grandma to everyone. No matter who you were, you felt completely comfortable calling them grandma and grandpa. Secondly, a consistent theme in everyone's remembrance of her was her faith. Her faith was both a witness and a beacon to all who knew her. My grandfather shared a story about he and grandma that I had never heard before. It was 1930 when he first met my grandmother. He said that the first time he touched her, God spoke to him very clearly that she was his. So he asked her out on a date and the very next day he proposed to her. The only problem was that she was 14 and he was 16. Grandma was not quite ready to settle down and get married, but after five years of waiting, they were married. 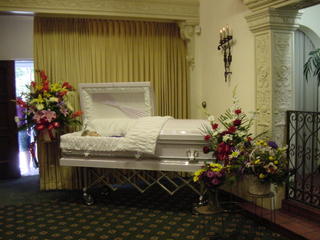 I had the singular privilege of officiating my grandmother's funeral. It was an honor I had not expected. I wanted to share something that was both encouraging and challenging. My grandmother was not afraid to speak the word of the Lord and to even challenge someone if it was needed. I shared the scripture from the story of Lazarus'' death. As Jesus and Martha discussed Lazarus'' death, Jesus said to Martha, "I am the resurrection and the life; he who believes in Me will live even if he dies, and everyone who lives and believes in Me will never die. Do you believe this?" (John 11:25-26) My grandmother believed in a now God. Not a God of yesterday, not a God of someday, but a God of today. She believed and lived her life as if God was with her every day. No matter what she needed, God was there to help her and to supply her with what every she needed in the moment. When there was a need, she did not wish God would meet the need, but she would pray believing that God would answer her prayers. At any moment of the day, no matter where she was, she could reach out and lay hold of her God and Savior. She did not wait for her death to begin to live in resurrection power, she lived it every day. 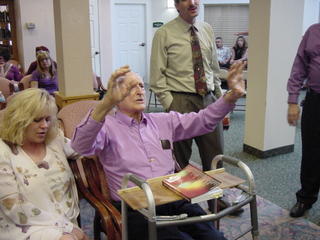 After the service, we returned to Hillcrest where my grandmother and grandfather lived. While waiting for supper, my grandfather asked my sister in-law to play some hymn so that they could worship awhile. This picture so typifies my grandmother's and grandfather's faith. At a time of great sorrow in his life, after saying goodbye to his wife of almost 70 years, he chooses to worship. In the good times and bad, my grandfather's first response is to worship. At first, I marveled at how well he was doing and how well he was holding up, but then I understand why. He is tapped into a strength far greater than anything you and I could muster up. He has found a source of joy that can comfort him in any sorrow. He has a father, brother, and friend that loves him more than any earthly human can. He serves a God who is ever gracious, kind, and loving to him. I hope that this might also be the testimony of my life as well.

Email ThisBlogThis!Share to TwitterShare to FacebookShare to Pinterest
Labels: My Grandmother